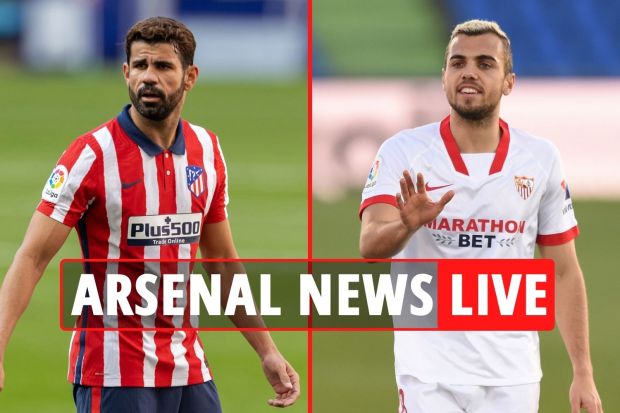 ARSENAL are back in action tonight as they face Brighton at the Amex Stadium.

Meanwhile SunSport revealed the Gunners have their eye on Joan Jordan, plus we’ve the latest on shock reports which link Diego Costa to the Emirates.

Under three hours to go now until the first whistle at the AMEX.

A win for the Gunners would mean two league victories on the bounce for the first time since the opening two games of the season, and move Mikel Arteta’s side up to twelfth in the table.

Arsenal players have been told by former Manchester United striker Louis Saha that they have ‘disrespected the history’ of the club.

The 42-year-old has has ripped into the attitude of some members of the Gunners squad with the club languishing in 15th spot in the Premier League.

Speaking to Ladbrokes at its launch of the 5-A-Side Bet on Tottenham v Fulham, Saha failed to hold back in his assessment of Arsenal.

“Yes, results are very important, but there have been a few occasions where players have disrespected the history of Arsenal Football Club.

“I’m not here to judge, but some of the attitude I’ve seen from their players is just not acceptable for a club of that stature.”

Gunners club captain Pierre Emerick-Aubameyang takes to Instagram ahead of this evening’s clash with Brighton.

Will the skipper be re-instated to the starting eleven by Mikel Arteta after missing out against Chelsea?

Or will Arteta stick with the young guns?

SEARCH FOR A CLUB

Former Arsenal midfielder Jack Wilshere is training with Championship side Bournemouth as he searches for a new club.

Wilshere spent ten years at the Gunners between 2010 and 2018, but recently had his West Ham United contract terminated by mutual consent.

Despite being an Arsenal player for ten years, his Gunners career was plagued by injuries, limiting him to just 125 appearances.

Despite breaking into the Arsenal first team this season, teenager Folarin Balogun could be on his way out of the Emirates.

The 19-year-olds contract in North London expires at the end of the season, with Germany a potential destination.

Balogun’s contract expires in the summer, meaning he is free to open contract discussions with overseas teams from January 1.

Reports yesterday suggested Liverpool were interested, but now German outlet Kicker claim Balogun has been ‘in conversation’ with Stuttgart over a potential transfer.

Balogun has bagged twice in the Europa League for the Gunners this season, and is looking unlikely to extend his contract beyond next summer.

Arsenal could have a new-look side in the coming weeks as Mikel Arteta looks to three transfers to save the season.

As revealed by SunSport, Arsenal are after Sevilla midfielder Joan Jordan.

Sevilla have put a £55million buy-out clause on the all-action midfielder but the LaLiga side are ready to listen to offers of around £32m.

And the Spaniard is understood to be keen on a move to the Premier League, especially to work under compatriot Arteta.

Emile Smith Rowe excelled against Chelsea but the opportunity to land Isco could be tempting.

Then in attack, free agent Diego Costa could be an option after his release from Atletico Madrid on today.

Arsenal’s official website has provided an update on the team news ahead of this evening’s clash with Brighton.

Defender Gabriel has tested positive for COVID-19 and is currently self isolating .

David Luiz and Willian have also been unwell, but not COVID related, and will re-join the squad on New Year’s eve.

Thomas Partey continues to step up his training since his thigh injury in the North London derby.

The Gunners hope Partey will be back in action early in the New Year.

Arsenal are looking to win back-to-back league games tonight for the first time since their opening two league games back in September.

The Gunners scored as many goals in their 3-1 win against Chelsea last time out as they had in their previous seven league games combined.

BREAKING: Atletico Madrid have terminated the contract of Diego Costa with immediate effect.

The Spanish striker’s deal was set to expire at the end of the 2020-21 season.

But with the LaLiga side keen to get him off the wage bill, there was talk they would allow him to leave for free in January.

The transfer window reopens on Friday, giving the ex-Chelsea striker all of January to find a new club, with Arsenal reportedly interested in his signature.

Here’s a look at a couple of pre match stats ahead of this evening’s game between the Gunners and Brighton.

Brighton won home and away league games against Arsenal last season – they’ve never won three in a row against the Gunners in league competition before.

‘STICK WITH THE YOUNGSTERS’

Darren Bent thinks Mikel should stick with the youngsters in tonight’s game against Brighton, and leave out club captain Pierre Emerick-Aubameyang.

Speaking on talkSPORT this morning Bent said: “I wouldn’t bring Aubameyang back. I wouldn’t bring any of them back. I think that team did well against a good Chelsea team and there seems to be a bit of a feel good factor around bringing some of the kids on.

“To get fans on side there’s nothing better than bringing some of your own into the first-team and they do well.

“If Aubameyang is fit for this next game and you take these young players straight back out again, confidence wise that might kill them a little bit. So I would stick with the youngsters and the more experienced guys might have to bide their time.

“For me, Saka is absolutely brilliant. I like Martinelli, he’s a big player and we’ve missed him this season, his energy, his pace, he can finish and score goals –…