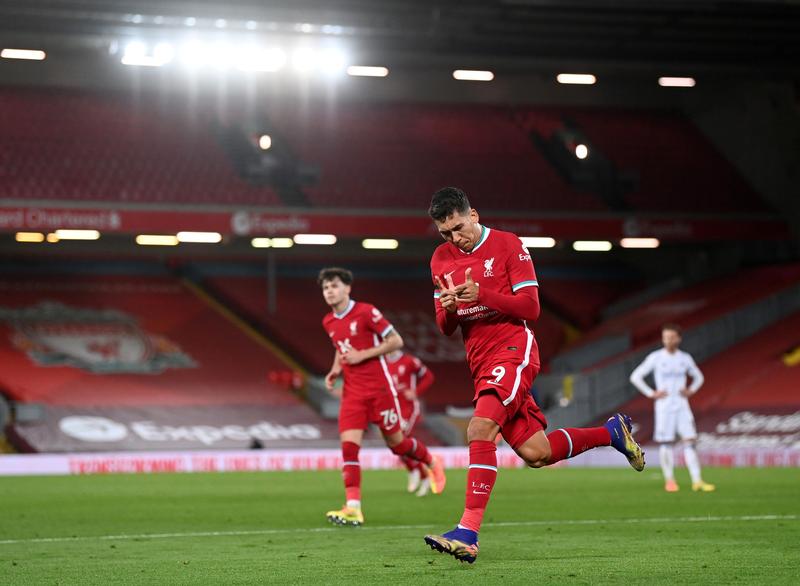 (Reuters) – Liverpool moved level with leaders Tottenham Hotspur at the top of the Premier League after a club record-setting 3-0 victory over Leicester City at Anfield on Sunday.

Ten-man Arsenal earlier hung on for a 0-0 draw at Leeds United after Nicolas Pepe was sent off for a headbutt early in the second half at Elland Road.

Liverpool are now unbeaten in 64 league games at Anfield setting a new club record and they were full value for the win.

The defending champions took the lead in the 21st minute when Leicester’s former Manchester United defender Jonny Evans, under pressure from Sadio Mane, headed a James Milner corner into his own net.

If that was a fortunate opener, the second was a trademark Liverpool goal with Andy Robertson’s perfect cross from the left turned in by an equally impressive glancing header from Diogo Jota.

Leicester keeper Kasper Schmeichel kept his side in the game with some excellent saves before Roberto Firmino made sure of the three points with a header from a Milner corner.

It was a deserved goal for the Brazilian who has struggled for goals and had twice hit the woodwork and also had an effort cleared off the line.

The win took Liverpool level on 20 points with Spurs, who beat visiting Manchester City 2-0 on Saturday, leaving Chelsea and Leicester two points behind the leaders after nine games.

Arsenal manager Mikel Arteta was relieved to get a point from his side’s trip to Leeds after a moment of madness from Pepe left them a man down from the 51st minute.

VAR officials spotted that the Arsenal winger had headbutted Ezgjan Alioski and referee Anthony Taylor took a quick look at the monitor before brandishing the red card.

Leeds had been the more dangerous even before the sending off with striker Patrick Bamford twice bringing saves out of Arsenal goalkeeper Bernd Leno.

Leno did well again to keep out a fierce drive from Stuart Dallas and then substitute Rodrigo crashed a shot against the bar from the edge of the area.

Arsenal nearly grabbed a winner, against the run of play, when Hector Bellerin put Bukayo Saka through on goal but Leeds keeper Illan Meslier did well to force him wide and then palmed away the shot.

Leeds struck the woodwork twice in the latter stages with Bamford heading against the post and Raphinha also striking the upright deep in stoppage time.

After three straight losses, Carlo Ancelotti’s Everton were in need of a win at Fulham and it was the prolific Calvert-Lewin who delivered, opening the scoring after 42 seconds.

Brazilian forward Richarlison, returning from a three-match ban, picked up a loose ball and ran wide to cross for England forward Calvert-Lewin who tapped in at Craven Cottage.

Fulham hit back through Bobby De Cordova-Reid’s neat finish after 15 minutes but Everton continued to threaten and were unlucky not go 2-1 up as Calvert-Lewin’s effort was ruled out for offside.

But the visitors did carve Fulham open again as Alex Iwobi switched play from the right and James Rodriguez fed Lucas Digne, whose first-time ball was met by Calvert-Lewin for his 10th goal this season as he moved top of the scoring charts.

Abdoulaye Doucoure made it 3-1 with a 35th minute header and although Fulham’s Ivan Cavaleiro missed a penalty after the break, Scott Parker’s side did get a return for their efforts with a goal from substitute Ruben Loftus-Cheek.

West Ham striker Sebastien Haller’s powerful second-half strike condemned Sheffield United to a defeat that leaves them rooted to the bottom with one point after nine games.