A meticulous planner, Unai Emery is not a man who takes tearing up his ideas lightly. At Sevilla, the Spaniard built a reputation for being conscientious to the point of obsession. He tries to plan everything and sits over hours of videos. A former player said of his briefings: ‘I ran out of popcorn.’

It should come as little surprise that he refused to let images of his players inhaling ‘hippy crack’ nitrous oxide at an exclusive nightclub, published on Thursday night, affect his team selection on Saturday.

Against Huddersfield Town five of the seven players seen on the CCTV footage started, another played 45 minutes and only Mesut Ozil missed out through injury. 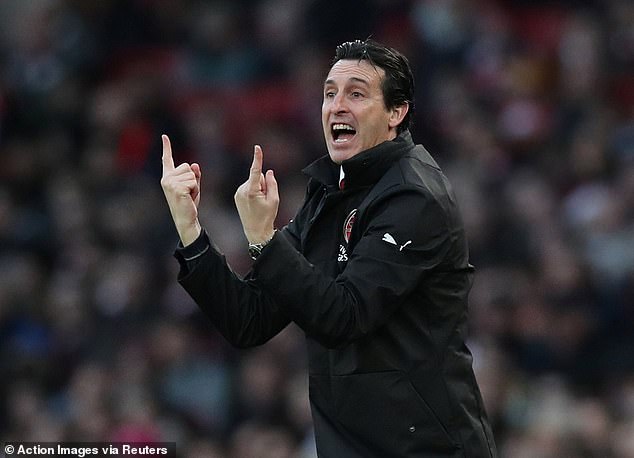 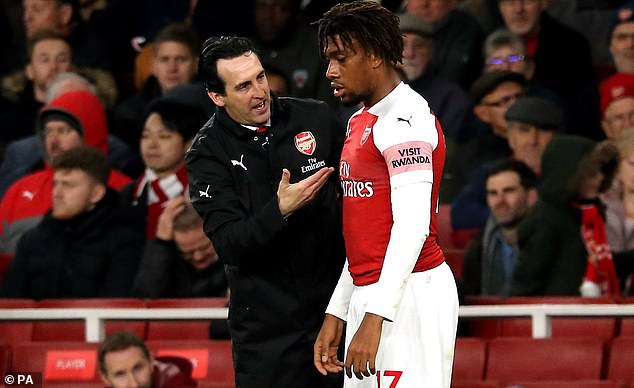 But Emery’s meticulousness also means he has several alternative plans that he is rarely slow to turn to. With his team struggling to unlock the Terriers, Emery got to half-time and had seen enough: Henrikh Mkhitaryan and Alex Iwobi were brought on. The former Paris Saint-Germain boss has made half-time changes nine times this season, easily more than any other manager at a top-five club.

Those quick changes are working a treat. Arsenal are now 21 matches unbeaten. They beat Tottenham – with the help of two more half-time subs – last weekend and drew at Manchester United in midweek.

Here they faced a team who, by their own admission, came with plans to be ‘a pain in the a***’, and they found a way to win. 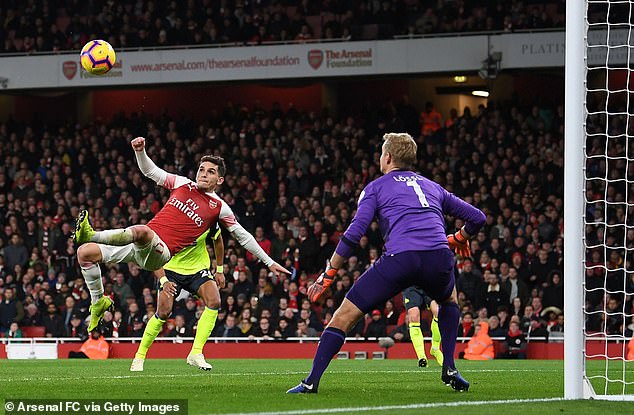 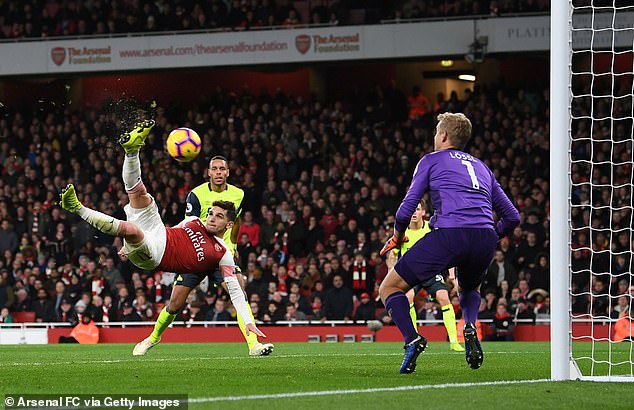 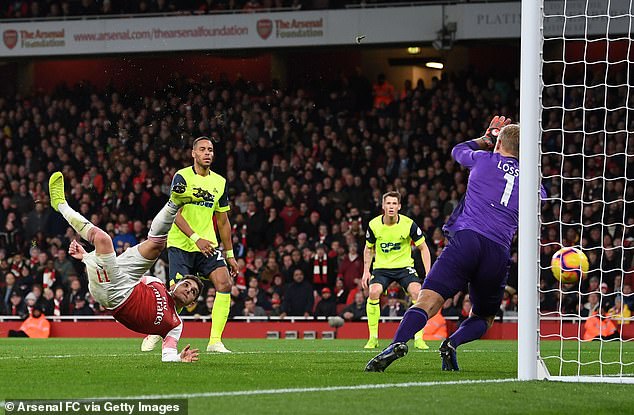 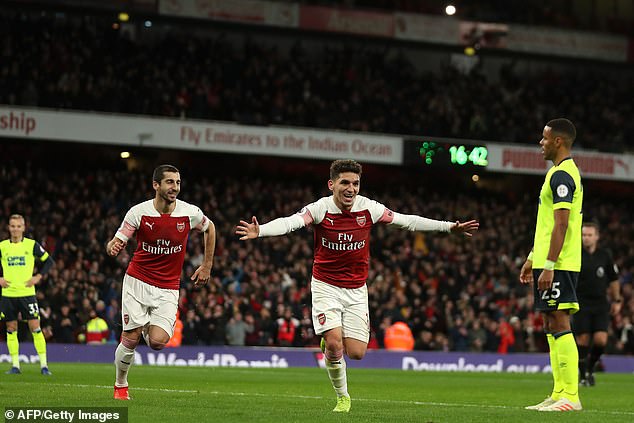 ‘If we can score quickly, or we can start better in the game, then maybe it’s easier for us,’ the Spaniard said. ‘But that can’t happen in this game. We needed calm and this showed we can be calm.’

Arsenal started in a 3-5-2 shape but when Emery pulled off a striker and a full back for two more midfielders it allowed them to create more in the late stages of the game.

Alexandre Lacazette and Stephan Lichtsteiner were sacrificed, replaced by Mkhitaryan and Iwobi. It worked. Iwobi made space for Matteo Guendouzi, his ball over the top found Pierre-Emerick Aubameyang and from the striker’s cross Torreira pivoted to finish acrobatically past Jonas Lossl. Job done. 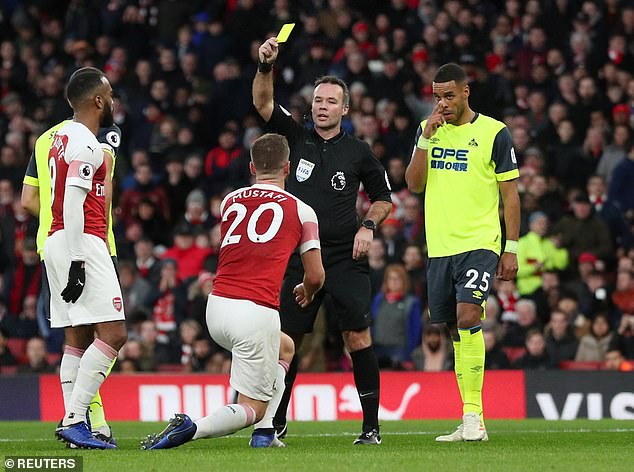 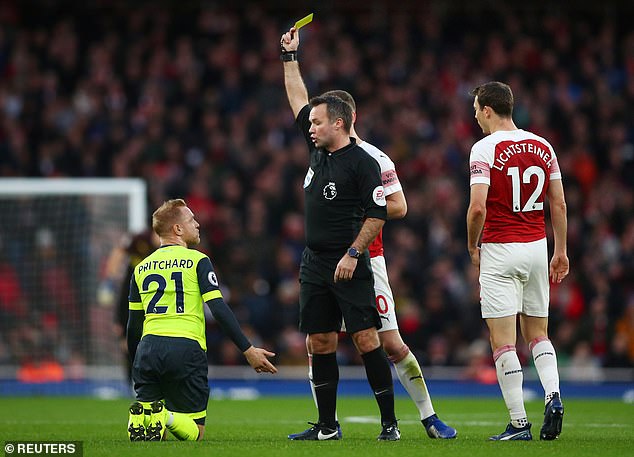 This was an otherwise unremarkable game, the tempo slowed by the constant fouls, which resulted in nine yellow cards being handed out – including three to Arsenal players for diving.

Huddersfield, meanwhile, left the Emirates for their Christmas party pointless but with the belief that they can pick up results away at the big clubs. ‘I think that we’ve shown we can be a pain in the a*** at times for some of the big teams,’ centre back Mathias Jorgensen said.

‘On a day like this we fight our a*** off so when we’re like that and Arsenal aren’t having their best day we can cause some trouble and we almost did.’

Back-to-back home games against Newcastle United and Southampton in the next fortnight should give Huddersfield better chances to escape the bottom three. 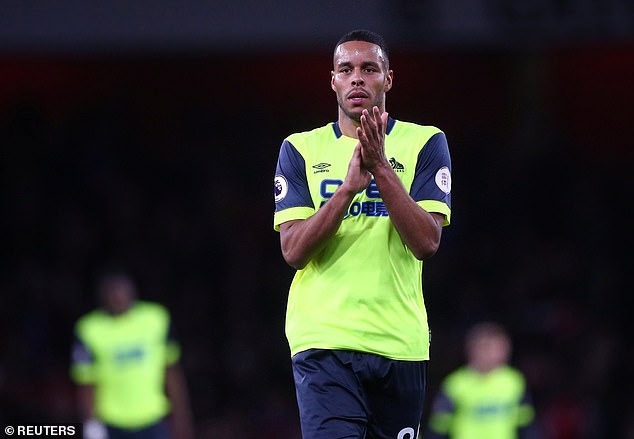